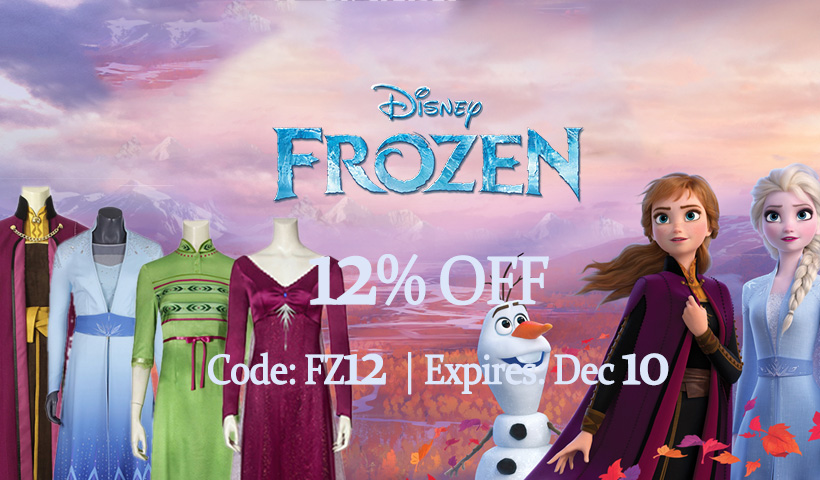 Enjoy 12% Discount on All Frozen II Costumes from the Best Store – Ccosplay.com

Frozen II, the sequel to the 2013 film Frozen, is a 2019 American 3D computer-animated musical fantasy film produced by Walt Disney Animation Studios. Set three years after the events of the first film, the story follows Elsa, Anna, Kristoff, Olaf, and Sven who embark on a journey beyond their kingdom of Arendelle in order to discover the origin of Elsa’s magical powers and save their kingdom after a mysterious voice calls out to Elsa.

Frozen II had its world premiere at the Dolby Theatre in Hollywood on November 7, 2019, and was released in the United States on November 22, 2019. The animation, visuals, music and vocal performances of the film are so impressive that win millions of fans throughout the world. Are you a fan of Frozen II? Do you want to dress up like one of the characters in the film? If your answer is yes, Ccosplay.com is definitely your first choice. Having been in this field for a few years, we offer movies and anime, games cosplay costumes, etc. The costumes from us are all hand-made, which can be daily used. This is the main difference between our costumes and other fancy dress and cheap mass products.

We are now making a promotion activity for Frozen II Costumes to show our gratitude and thank for all clients’ long-time support. That means it is the best time to buy Frozen II Costumes. It will help you save a lot during our big sale. Here is the detail of this activity.
Activity Content: 12% Discount for Frozon II Costumes
Activity Duration: Now – December 10th
Discount Code: FZ12

Here are the pictures of all Frozen II Costumes. If you are into one of them, do not hesitate to buy one.